Poecile atricapillus
​A familiar backyard bird thanks to their distinctive markings, unique call, and bold curiosity; the chickadee wins over hearts across the country with their playful personalities and willingness to arrive first to new feeders.
🌲
Often seen flitting back and forth from forest to feeder, these little birds hide their seeds throughout their home territories, remembering thousands of hiding places over the course of each year.
🌲
During winters they conserve as much energy as possible by going into regulated hypothermia at nighttime, dropping their body temperature by 15 degrees F while they sleep.
🌲
To adapt to new social changes each year, Chickadees allow old brain neurons to die off each autumn and thus forget flock hierarchies while they winter. Slowly, fresh neurons help establish new ranks within the socially amnesiac flocks. Usually stronger bonds between mated pairs maintain the core of a flock, but the previous year’s offspring no longer remember their place nor attachment to their original family flock.
🌲
Chickadee calls are complex and can even seem like their own language. They can communicate information on recognition of other flocks, personal identity, as well as concern alarms. The more dee notes in a chickadee-dee-dee call, the higher the threat level. Other prey species will often heed Chickadee’s warning calls responding as if one of their own sounded the alarm.
🌲
One of my personal favorites, the Chickadee was also my father‘s favorite. He adored their spunk and tenacious spirit, their familiar call of “Cheeeese-burger!” And watching them be the first to arrive at the feeders each morning and evening. He found one sitting on the sidewalk one day and reached down to see if it was okay. The little bird waited until his fingers barely brushed its side before flying away perfectly fine. He came home and announced that he had had an encounter with a spirit guide and the Chickadee was forever his “power animal”. Joking as he might have been, the little black capped bird always held a special pace in his heart. Each call and sighting nudge a reminder of his presence within each of us still, a frequent visitor to soften the physical loss of a curious and boisterous soul. 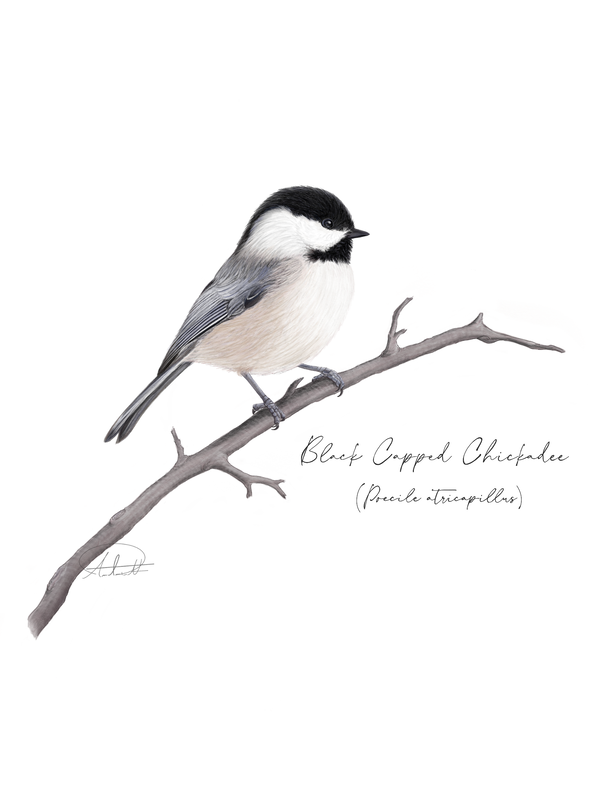